The existence of leprosy goes back to the dawn of time.  Even the Bible refers to it, in the book of Leviticus, where it is question of all the precautions to take in order to isolate the sick from society.

In the Middle Ages, the Church even had a liturgical ceremony that emphasized the definite exclusion of lepers from society as if they the living dead.  The lazarets made their appearance at that time.  Around the fourteenth century, leprosy had so much diminished in Europe that, in 1695, Louis XIV abolished the lazarets.  However, leprosy persisted in Sweden, Finland and Norway until the twentieth century. 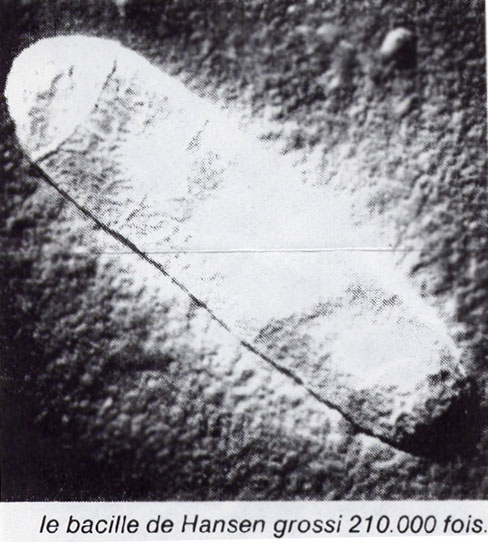 In 1873, leprosy, or the Hansen disease, was identified in Norway, as a chronic disease (infectious disease) of the skin.  It affects the peripheral nerves and the mucous of the upper airways.  It is caused by the mycobacterium leprae, or Hansen bacillus.  It is a serious disease which has the tendency to cause disability in patients left untreated or treated too late.

Leprosy is a bacterial, not very contagious, disease transmitted by buccal or nasal droplets produced by an infected untreated person.  It can also be transmitted by direct contact with damaged skin.  Incubation takes a long time: between 2 to 10 years, even 20 years, and as a consequence, most of the cases are detected in young adults.

Clinically, there are two distinct types of leprosy: tuberculosis leprosy, which is not contagious and relatively benign in the long run, and leprous leprosy, a serious leprosy, a progressive and contagious disease.